Posted on September 23, 2021 by Justin Royce Leave a comment

The 2021 College Football Season has already seen huge shakeups in the rankings. Multiple playoff contenders have already suffered early season losses, and a countless others have had close calls. There has not been one team that has looked dominant and unbeatable all year. This season has already been crazy and now that conference play is about to ramp up, things may even reach a 2007 level of craziness. This week has two top 20 matchups, both at neutral sites, as well as rivalry games and conference openers. This week will be one of the weeks that will separate the contenders from the pretenders. Without further ado, lets get into the slate. (NOTE: All times eastern, Lines via Draft Kings as of 9/22)

Notre Dame and Wisconsin will kick off Saturday when they meet for the first time since 1964 at Soldier Field. The Badgers come into this game at 1-1, after an opening week loss to current #6 Penn State. Notre Dame comes into the matchup at 3-0, but without an impressive win. The Badgers are 6.5 point favorites for the neutral site matchup.

Although Notre Dame has not looked great this year, them being 6.5 point underdogs makes almost no sense. Chicago is rife with Notre Dame grads and fans. This will be a predominantly Notre Dame crowd, so I expect them to feed off this energy and come out strong and at least keep this game inside a touchdown, if not win the game outright. I also expect this game to be a classic Big Ten style game, Notre Dame may not be great defensively but Wisconsin does not have a real quick strike offense, making the under the play in this game. Give me the Badgers in a minor “upset” 21-17. 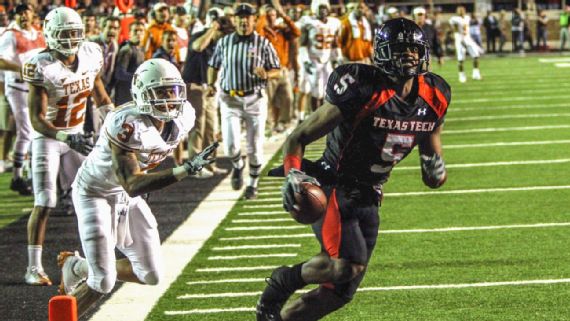 The next game on the board is a must watch game if you like points. Undefeated Texas Tech travels to Austin to take on Texas in a game that is almost always a shootout. The Longhorns come into this game off a 58-0 beat down of Rice. Texas Tech comes into the game at 3-0 off a win over FIU. Texas won last years matchup in Lubbock 63-56 in a classic. Although both teams have high scoring offenses, they do it in very different ways. While Tech does most of their damage through the air, Texas rides standout running back Bijan Robinson, who already has 5 rushing TD’s on the year.

There are multiple ways to look at this game, while some people may believe Texas will run away with this game, 5 of the last 6 matchups have been one score games. When these two teams get together, you can always guarantee that there will be points scored. 5 of the last 6 contests between these two teams have had more than 50 points scored. I would not be shocked if this game is nearing the total by halftime. Even if Texas jumps out early, Tech will stay in the game due to their quick strike air raid offense. I also would not be shocked if Texas Tech wins this game outright. Take Texas Tech with anything over a field goal.

One of the sneaky good games of this early window is another one of the SEC-ACC matchups. So far the SEC is 4-1 in head to head matchups. This is going to be a great matchup between 2 middle of the pack teams in their respective conferences. It will be an interesting to see how the Missouri offense matches up against the Boston College defense. Boston College is always a tough team to play at home and it will be an early kick for Missouri. I am going to give Boston College the edge in this matchup. Give me the Eagles 31-28

Arguably the biggest game of the weekend takes place in the SEC, when Texas A&M and Arkansas travel to Jerry World for their annual showdown. This game is the other Top 20 matchup taking place this weekend. The #7 Aggies come into the matchup winners of 11 straight games and the last 9 head to head matchups. Arkansas enters the Southwest Classic at 3-0 and ranked 16th in the nation. The Razorbacks are riding high after beating “#15 Texas” 40-21 two weeks ago in Fayetteville.

This rivalry has recently always produced instant classic and this game is almost always close, no matter what the records are. Even when the Razorbacks were at the bottom of the barrel they would always play the Aggies close. The Aggies opened at -7.5 and the line has already moved down to -4.5, the total is currently at 47. While the majority of the public seems to be on the Razorbacks, the sharps seem to still be on the Aggies. The large public backing of Arkansas must be music to the ears of Aggie fans and backers. The last 3 times the Aggies have been single digit favorites, they have covered each time.

One thing that seems to be scaring the public is the fact that the Aggies are starting backup QB Zach Calzada, the Aggies don’t really rely much on their passing game. Although I think Arkansas has a good team this year, I believe the Aggies will dominate the lines of scrimmage, especially with the news that Arkansas will be without their starting left tackle and center. The Aggies may be young on offense, but they will dominate defensively. Give me the Aggies in a 27-10 game.

Another interesting game in the 3:30 window takes places when Clemson travels to Raleigh to take on NC State. This game is a game that a lot of people will be focused on after Clemson struggled with Georgia Tech on Saturday.

Although historically Clemson has not struggled against NC State in the past, Clemson does not seem to be clicking on all cylinders this year. Clemson definitely has one of the best defenses in the country as they have not allowed an offensive touchdown yet this year, but I expect that to change this week. North Carolina State lost at Mississippi State two weeks ago, but dominated Furman 45-7 last week. NC State is averaging 33 points a game this year.

I also don’t believe Clemson is that good offensively this year, so I expect a low scoring game. I also always love home underdogs in conference play. Give me the Wolfpack +10 and on the money line, NC State 21-17.

The primetime ABC matchup should be a good one when West Virgina travels down to Norman to take on the #4 Sooners in a game that has the makings of a classic Big 12 shootout. West Virgina is coming off an impressive win against #15 Virginia Tech, while #4 OU comes in at 3-0, but has yet to look impressive against quality opponents.

I think West Virgina is a very good football team. West Virginia’s only loss on the year happened in Week 1 when they lost to a very talented Maryland team. Oklahoma and West Virgina have historically played high scoring games, and although OU has won 8 straight in this matchup, I have a hard time believing they cover the number in this matchup. Oklahoma also has not looked good at all this year and this is their first real test of the year. Give me West Virgina straight up in a shootout, West Virgina wins 51-49.

This is starting to drag out so I am going to do a couple quick hitters to close this out.

A matchup of 2-1 teams takes place, when Tennessee opens up conference play by traveling to the Swamp to take on the #11 Gators. The only side I really like in this game is the over 63.5. This might be one of the games to tease the total down to 57.5 and Tennessee up to +26.

This isn’t a game that I will touch the spread on but that total is way too low. Neither one of these teams can play defense, and both have pretty high scoring offenses, expect a shootout to start the day. Start your day with a nice simple bet and just cheer for points.

I have a feeling that this week will only be the beginning of a chaotic stretch where multiple ranked teams get upset, so instead of fearing chaos, embrace it. Good luck this week, may the odds be in your favor.

Always gamble responsibly, if you or someone you know has a gambling problem call 1-800-GAMBLER, remember its supposed to be fun.